If embraced, digitalization potentially a strong engine of economic growth

The role of digitalization as the driver of economic recovery in Central and Eastern Europe as well as the world, in general, was highlighted at the Bled Strategic Forum panel on the digital transformation. The panellists also noted the momentum digitalisation gained with the coronacrisis and the process’s benefits as well as pitfalls.

The debate was opened with a keynote address by Mr Zdravko Počivalšek, Minister of Economic Development and Technology of the Republic of Slovenia, who noted that remaining competitive in the global arena through digitalisation “is especially relevant for this region since the size of domestic markets limits growth opportunities” and the “role of the governments is thus of high importance”.

Highlighting Slovenia’s efforts in this field, Mr Počivalšek pointed to the country recently setting up the first international research centre for AI under the auspices of UNESCO. “We need to embrace digitalisation and take collective action to build economies that deliver inclusive economic growth, prosperity and safety for all,” the minister said.

Several participants highlighted the momentum that the digital transformation gained with the coronacrisis.

Ambassador Ulrik Vestergaard Knudsen, Deputy Secretary-General at the Organisation for Economic Co-operation and Development (OECD), pointed to estimates that advances were made in some areas in four months that would have taken four years otherwise.

Marked progress, for instance in healthcare approaches, was highlighted by Mr Christian Pawlu, Head of Strategy, Portfolio and BD&L at Sandoz. Mr Pawlu pointed to “a tremendous uptake of digital ways to work” and the digitalisation benefits for companies’ financial and production planning. “Before the crisis, we had about 20% of doctors who we were able to approach via digital channels – now this is 70%”.

Mr Joško Mrndže, Country Manager for the Adriatics Region at Google, said that many of the trends, accelerated by the coronacrisis, such as e-commerce, remote working and learning, had staying power. As for digitalisation in the region, Mr Mrndže pointed to Google’s support programmes and expressed his belief that quality education and good infrastructure were promising indicators.

Mr Tiit Riisalo, Director of the Office of the President of the Republic of Estonia, recounted the Estonian experience, highlighted trust-building as a key element. This takes a long time but is crucial, also for interoperability and in terms of regional cooperation, said Riisalo, who noted how many people do not realise that for instance storing private healthcare data digitally is safer than doing that in physical form.

Mr Simon Zajc, State Secretary, Ministry of Economic Development and Technology of the Republic of Slovenia, was happy to report about Slovenia’s progress in the Digital Economy and Society Index (DESI). He pointed to efforts made in recent years, noting one result was that “right now it is easier to set up a company in Slovenia than ever before”.

Meanwhile, Mr Knudsen stressed the importance of the digital transformation in reviving general growth, but he acknowledged that overall, the digital transformation had for some reason not yet translated into productivity gains. Still, there are frontier companies with rising productivity, and it is important to learn from them, he said, while also stressing the huge potential digitalisation entails for SMEs as the backbone of the economy.

He, however, warned more serious disruptions awaited the world in five or ten years in connection to AI. He believes a new social contract will be needed in a few years due to AI changing the job market in some segments in “ways that will require a slightly different distribution of wealth”.

Other dangers and ideological aspects of digitalisation were broached as well, with Mr Knudsen, for instance, saying: “We need to make sure that this digital transformation does not become a tool for the enemies of democracy and human rights”. 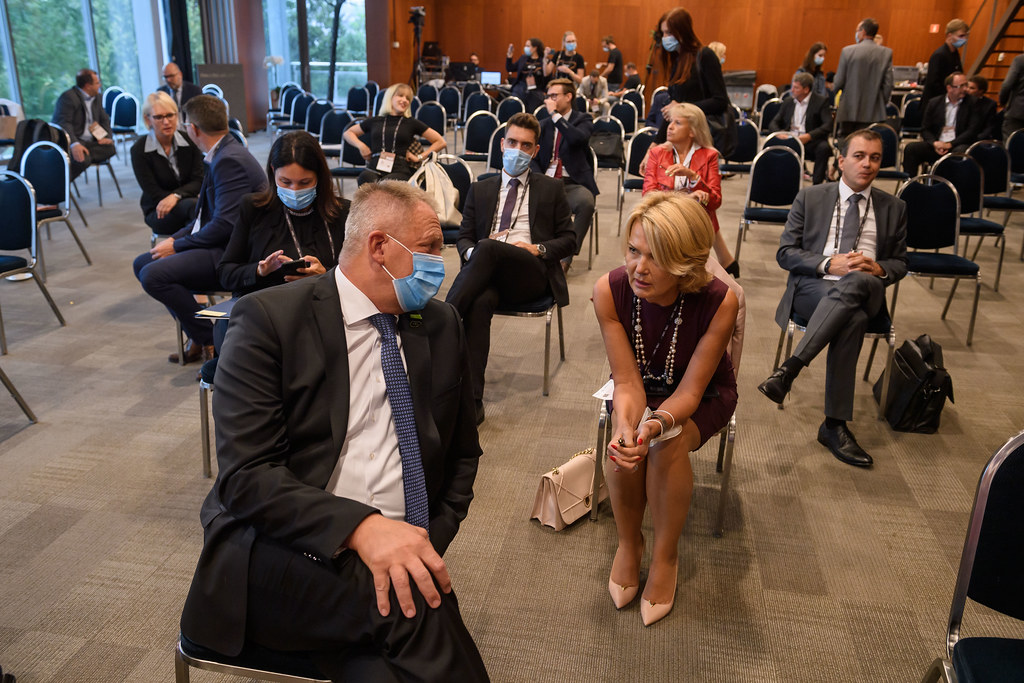