Cooperation in the focus of ministerial debate on COVID-19 crisis

The need for close cooperation, communication and the relaxation of restrictive EU state aid rules in the face of the global pandemic were in the centre of a panel debate featuring top foreign policy representatives from across the EU at the Bled Strategic Forum (BSF).

The discussion, which focused on the COVID-19, the response that followed and ways forward, also showed participants sharing the view that the EU provided valuable support but still the key, initial, response to the pandemic was mounted by member states.

H.E. Mr Josep Borrell Fontelles, High Representative of the European Union for Foreign Affairs and Security Policy and Vice-President of the Commission for a Stronger Europe in the World, said the pandemic was a catalyst that brought players together and showed the importance of communication.

He added that the pandemic showed the EU could be creative, case in point being the recovery fund, an idea that would not have been acceptable a year ago. He did warn, however, that a lot of work is still to be done, as the package must still be approved by all national parliaments, and in some cases even regional parliaments.

H.E. Mr Ivan Korčok, Minister of Foreign and European Affairs of the Slovak Republic, said that the EU “absolutely” provided help in addition to what was already being done by his country. He illustrated that while the EU was not able to provide masks when the pandemic reached the continent, the EU is now leading member states out of the crisis with the recovery fund.

Representing Germany, currently at the helm of the EU Council, Ms Michelle Müntefering, Minister of State at the German Federal Foreign Office, said via video link from Berlin that the pandemic was a top priority of the German presidency and expressed the belief that the EU would emerge stronger from this crisis.

However, when asked whether nation states or the EU would emerge stronger from this crisis, panellists expressed reservations about putting these in antagonistic terms. H.E. Mr Zbigniew Rau, Minister of Foreign Affairs of the Republic of Poland, labelled this an artificial conflict, adding that only strong member states made for a strong EU, while H.E. Dr Gordan Grlić Radman, Minister of Foreign and European Affairs of the Republic of Croatia, said member states and the EU needed each other.

Mr Korčok also underlined the need to fight misinformation in order to become more effective in fighting the pandemic, while H.E. Mr Péter Szijjártó, Minister of Foreign Affairs and Trade of Hungary, criticised liberal media and other EU leaders for criticising the Hungarian government when it decided the cabinet take over some of the parliament’s powers.

Going forward, it will be key to support the EU’s economy, the panellists agreed, with Mr Szijjarto expressing the belief that the bloc should relax its strict state aid for businesses to help preserve jobs, and in turn drive demand to fuel the economy.

H.E. Dr Anže Logar, Minister of Foreign Affairs of the Republic of Slovenia, shared this view but also added that stable governments and efforts to refrain from political propaganda will be key going forward. He also stressed the importance of the economy, noting that “It is necessary to invest in projects that will have added value in the future.” Slovenia’s programme for its EU presidency next year includes a simplification of procedures for the drawing of EU funds. 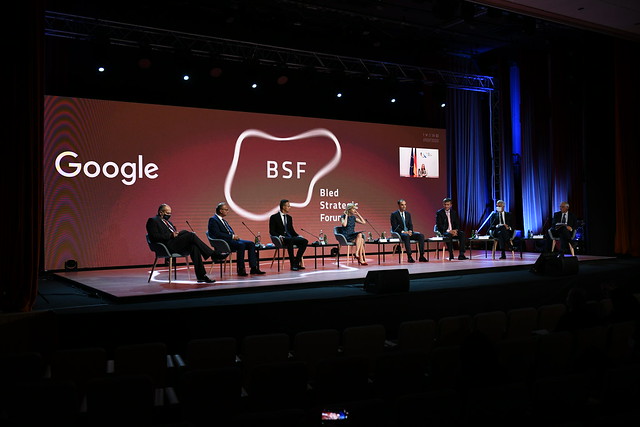